Applications of blockchain technology start to enter the consumer mainstream

While large parts of the northern hemisphere were battling with a record heatwave, the Cryptosphere was hit with another Winter. In the wake of a broader economic crisis – war in Ukraine, increasing inflation, tumbling tech valuations – total global cryptocurrency market cap lost about 55% of its value in the months between January and July 2022[1]. Trading volume on OpenSea – the leading marketplace for NFTs – is down by more than 85% from its peak in January 2022[2]. Some crypto-lending firms, notably Celsius, have collapsed; some Stablecoins, like Terra, have been obliterated. At least one crypto hedge fund, Three Arrows Capital, has gone bust[3]. “Crypto is dead!” Or is it? Burda Principal Investments (BPI), growth investor in consumer-related digital businesses, such as Vinted, Skillshare, Nord Security and Carsome, is keeping a close eye on developments and emerging companies in this space as we think, the consumerization of Web3 and NFT-based models will be a game changer. In the following, we look to explain our reasoning by sharing some thoughts and perspectives on the space. Before moving on, we’ll briefly recap some of the key terms associated with the space.

Blockchain technology refers to distributed databases that are shared among the nodes of a computer network. Modern Blockchains, such as Ethereum or Solana, are programmable, for example to automatically execute Smart Contracts. They essentially resemble shared computers that anyone can access yet no one controls. Blockchains offer untrusting parties a way to reach a consensus on a common digital history without using trusted intermediaries, such as a banks or other walled gardens.

Tokens are digital assets based on Blockchain technology, for example representing a digital currency, such as Bitcoin. Non-Fungible Tokens (NFTs) are unique digital assets. They are used to authenticate scarcity and provenance online and can represent anything from a digital artwork, such as “Everydays – The First 5000 Days” by @beeple to a media asset, such as a new song by The Chainsmokers. What is interesting about NFTs – besides some eye-watering price tags you might have read about – is their ability to introduce the concept of ownership, independent of centralized platforms, such as Amazon, Apple or Meta, to the internet. Think: Do you / your kids actually “own” the digital goods acquired on Fortnite (over $5b worth of which were purchased in 2021)? Speaking of ownership and (de-) centralization:

Web3 is used to describe the next evolution of the World Wide Web from the static “read-only” websites of Web1 (roughly 1990-2005), over the “read-write” centralized and all-powerful platforms of Web2 (roughly 2005-today), to a “read-write-own” Web3, where ownership and control is decentralized and shared among users and creators.

Metaverse is often associated with the terms above. Unfortunately, there is not really a clear definition of the topic yet[4]. As a discussion on the Metaverse would go beyond the boundaries of this article, let’s keep it simple and think about Metaverse(s) as persistent virtual environment(s) that are accessed via the Internet. The items described above, e.g. NFTs, may function as economic infrastructures in this context, enabling people to buy, sell, store and own goods and services in the metaverse.

In the following, we are going to explore VC and Consumer momentum in the crypto space

Bitcoin launched during the aftermath of the global financial crisis in early 2009 and famously kickstarted the rise of Blockchain technology[5]. In 2015, Ethereum launched and enabled developers to write Smart Contracts and decentralized apps that could be deployed to a live network. This propelled the applications of the technology beyond digital currencies. Ever since, visionary entrepreneurs and smart engineers have been building various innovative applications in the space – independent of the volatility in cryptocurrency prices and despite public polarization and scepticism.

2021 was an outstanding year when it comes to global startup funding overall ($-volume was up ca. 100% YoY). However, the growth of venture investment in Blockchain-related startups still dwarfed the development of the average market. According to PitchBook, $27b of VC investment was poured into the space (up >400% YoY). This year’s funding volume already reached 65% of 2021’s breakout year!

This volume of new investment that has been put to work. The tier-1 names in the VC scene launching new crypto-focused funds (e.g. a16z, Sequoia, Cherry) and headline-grabbing IPOs (e.g. Coinbase) further amplifies Blockchain’s long-term credibility and supercharges innovation by substantially and sustainably attracting more talent with diverse backgrounds as well as new sources of capital and knowledge form institutions that have perhaps previously shunned the space.

Due to the popularity of Bitcoin and the efficiency gains from trustless disintermediation in the finance industry, Blockchain applications are often associated with money and finance. However, the use cases are much broader. As seen for example in this PitchBook market map from H1 2022, there are companies tackling sectors like Healthcare, Supply Chain and Real Estate with Blockchain-based solutions. Below, we will particularly explore the consumer applications of the technology.

While the hype around cryptocurrencies and NFTs has slowed down again, the newly formed teams and freshly funded projects – with ample runway – continue to build great products. With less momentum from fundamental crypto growth, there is an even higher motivation to establish more sustainable business models and ship products with even more utility for consumers and businesses, rather than banking on sales of tokens with high price tags. We believe this is a great chance for entrepreneurs, investors, and large corporations alike.

One trend caught our eye in particular: The “Consumerization of Blockchain Technology”. During the crypto hype of 2017/2018, public attention was largely focused on Blockchain-based currencies and applications potentially disrupting the financial system. The more recent wave extended the crypto-discussion into a broader scope and consumers are interacting with Blockchain technology in diverse ways beyond financial transactions.

To guide our thinking, we categorized this consumerization into four formal buckets: Enhancement, Disruption, Revolution and the underlying Infrastructure. The first three are most relevant for us as investors, hence we will explore them in more detail here. 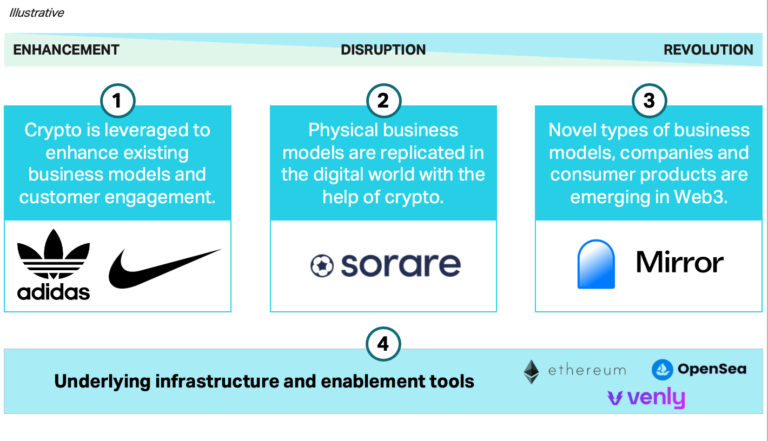 Enhancement: Tokens / NFTs are well suited to drive engagement and loyalty of consumer brands due to the participatory nature of token ownership (i.e. NFT-owners are incentivized to help the community / the brand increase in value). Big-name consumer brands, such as the NBA, Adidas, Mattel and Walmart started experimenting with the opportunities of Blockchain technology by launching own NFT-initiatives to drive consumer engagement and ultimately add value to their core business. Such participation from consumer brands outside of the tech ecosystem signals and fosters increasing mainstream consumer awareness and represents a significant turning point for the Blockchain space, long associated with tech-dominated culture. Nike even doubled down on the space by acquiring NFT-studio RTFKT to ensure brand-relevance in the cultural context of Web3.

Disruption: Blockchain technology also paved the way towards the digitization of business models that exclusively took place in the physical space in the past. Primarily enabled by NFTs bringing the concept of ownership into the digital sphere (see above). Massive consumer markets, such as collectibles, are increasingly imbued with crypto use cases. Sorare is perhaps the most prominent and intuitive example of a traditionally offline business model (football card collecting) transferred to the online world (digital football card collecting), which also brought about various benefits for consumers (combining card collecting with engaging gaming features, higher marketplaces liquidity etc.)

Revolution: Previously unseen consumer business models are also created off the back of Blockchains, taking the possibilities of the technology even further. Mirror.xyz (2020) and Royal.io (2021) are two examples that recently emerged in the Open Media space, valued at $100m and $280m, respectively. Both companies leverage Blockchain tech to disintermediate the relationship between creators and their communities, a core theme in Web3[6]. Both companies transform users to actual co-owners of specific media productions (e.g. an Article by Fred Wilson or a Song by The Chainsmokers). This level of consumer participation did previously not exist. We expect more and more companies to pop up in this area over the next months and years, following a similarly revolutionary developments in the Finance space. We are especially interested in teams that adhere to the two hypotheses summarized below.

[5] There existed other forms of Blockchains or distributed ledger technology as early as the late 1970s.
[6] Read for example Chris Dixon’s article “NFTs and a Thousand True Fans” here: https://future.com/nfts-thousand-true-fans/

Economic value is generated by the production and exchange of goods and services. Crypto use cases are often rightly criticized to not generate real economic value. This is because a lot of the nominal value generation in crypto comes from speculative behaviour and use cases without actual utility.

Economic value in the context of crypto is often generated through decentralised and highly scalable network effects. Tokens are a great way to efficiently bootstrap and reap exponential network effects. That is because participants are also the owners of the networks. These owners can be incentivized via tailored Tokenomics to work towards the value-generating goal of a (self-governing) network (e.g. installing and maintaining a wireless hotspot). Through these mechanisms, overhead and labour costs are significantly reduced or even nullified. As network-tokens can appreciate over time – once the network grows and its effects become valuable – early contribution is incentivized, hence the mentioned bootstrapping advantage.

However, eventually the network effects need to bring in real-world economic value, as the network’s value should not solely rely on growth of the network itself. An example for the former would be the Helium Network, which created the largest IOT network for businesses via Token incentives [7]. Ultimately, businesses pay for the usage of the network, as it bears real value for them. An example for the latter could be a PFP NFT community that solely gathers through the promise of increasing NFT-prices, which are not linked to real economic value, yet collapses once the new entrants are not willing to pay a higher price for the community’s NFT. Similar issues are associated with Ponzi schemes.

Gaming is a broad sector that combines aspects from both buckets: Disruption (e.g. collectibles combined with gamification, like Sorare) and Revolution (e.g. play-to-earn or engage-to-earn models like FlipFam). On top of that, Gaming – the globally largest entertainment market – has the potential to be one of the first areas of true mass-market adoption of “consumerized” Blockchain products. Gamers are already used to paying for digital assets and spending time in virtual worlds, reducing adoption barriers and the need for market education, for example when it comes to paying for an NFT representing property within a Metaverse. At the same time, NFTs have the potential to make in-game purchases more sustainable and more rewarding for consumers (e.g. reselling of interoperable digital assets on secondary markets).

[7] Further reading on Helium can be found here: https://www.readthegeneralist.com/briefing/helium

Burda Principal Investments is one of the leading early-growth investors in sustainable business models in the consumer digital and tech space. The trends outlined above keep getting us more and more excited about the various consumer use cases in the crypto space.

If you are active in the field and want to support us on our journey towards Web3 by sharing your knowledge or telling us about your project, feel free to reach out to Christian or Friedrich, who will continue to dive deeper into the space in the coming months and years.